Will your daughter be able to afford her dream life? Will your son be able to live the way he wants to—considering the adult income he’s headed toward right now?

Have your kids (ages 8–26) complete this short quiz sponsored by Jump$tart. (They’re rockstars in building financial literacy for students.)

If your teen or college student wants to get a good job someday but doesn’t know which career focus to pick, here’s a great inspiring article that can help—no matter the kid’s current age:

12th Grader’s Got No Career Direction? Do This—Right Now.

Give your kids a jumpstart on a dream life. Get your copy of: 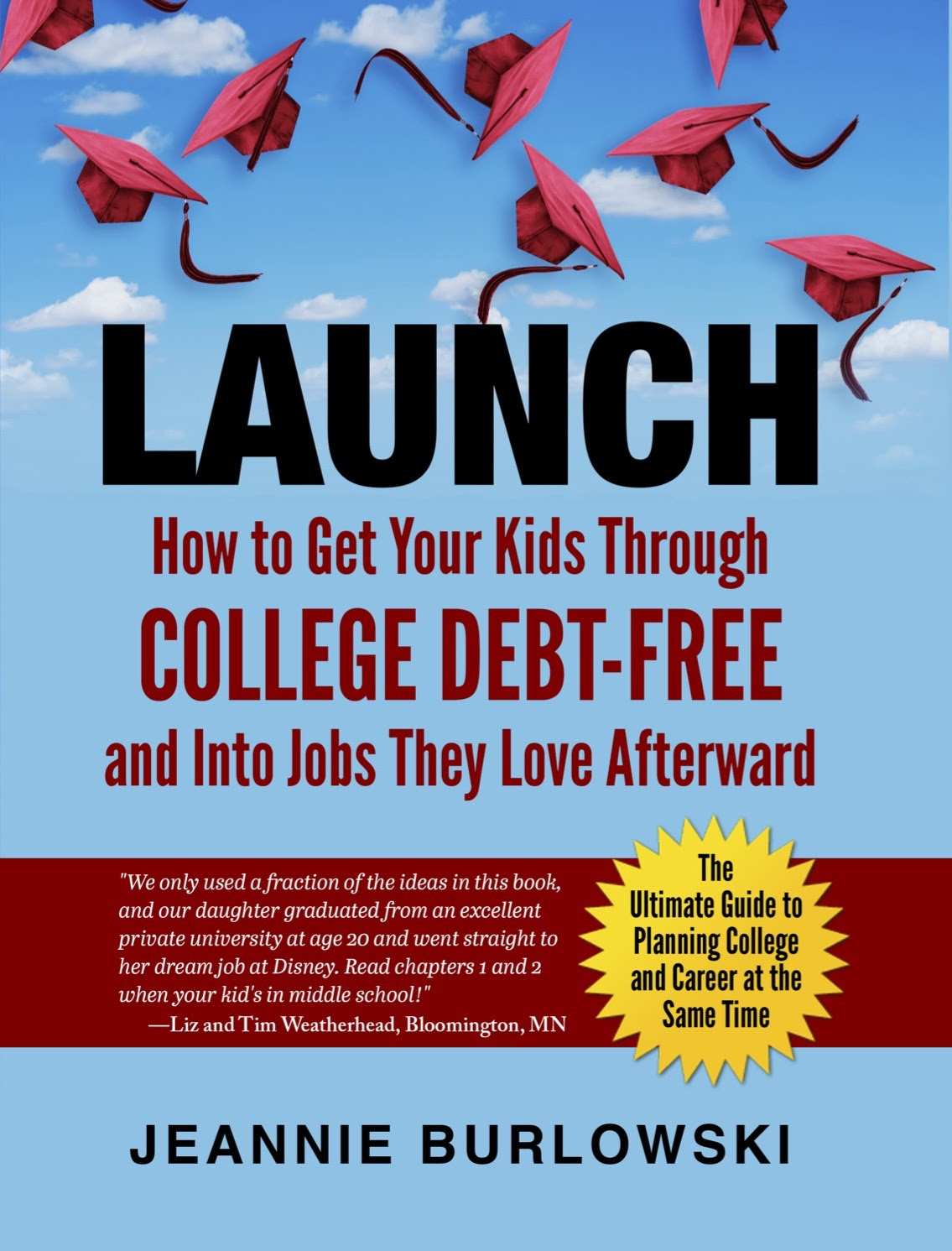 Pick out what you need to read in it using the fast-paced, 10-minute video instructions here.

END_OF_DOCUMENT_TOKEN_TO_BE_REPLACED

Some kids decide not to go to college after high school. This can work out great—if they opt for high quality job training instead of heading off to 4-year college. But what if your kid wants to work a minimum wage job in the years after high school? Is there any hope that he or she will move out of your house?

A minimum wage job after high school puts kids at high risk for living in their parents’ basements.

END_OF_DOCUMENT_TOKEN_TO_BE_REPLACED

You desperately want your kids to succeed academically in school and in college so they can have a shot at lifetime career success—but cajoling and hovering and pushing them is just so exhausting.

Here’s fantastic help that will take you under two minutes to implement.

According to world-renowned Stanford University psychologist Carol Dweck (who’s done decades of high-level research on achievement and success), the difference between academic and career success and academic and career mediocrity boils down to whether the child has a fixed mindset or a growth mindset.

Carol Dweck describes the difference between these two mindsets this way:

In a growth mindset, people believe that their most basic abilities can be developed through dedication and hard work—brains and talent are just the starting point. This view creates a love of learning and a resilience that is essential for great accomplishment. Virtually all great people have had these qualities.”

This is fantastic in and of itself, but here’s even better news.

END_OF_DOCUMENT_TOKEN_TO_BE_REPLACED

With all the national conversation around legalizing marijuana, many teens are jumping to the uninformed conclusion that it’s low-risk for them.

Experts, however, are extremely worried about the impact of marijuana on developing adolescent brains.

Not only that—but there’s one certain kind of marijuana that’s so dangerous that possession of it is a felony. Make sure your kids know this, because if one of their friends pulls it out, they’ll want to run for the hills as fast as they can.

My grim conversation with the police officer

When I interviewed a police officer to get information for this article, he told me in grim terms that the form of marijuana called “wax” (also known as “dabs” or “hash oil”) is especially dangerous for teens and adults due to its exorbitantly high THC level.

It’s so dangerous that possession of even a tiny amount of it is a felony.

This is one of the strongest arguments there is for being extremely careful who you get into a car with.

END_OF_DOCUMENT_TOKEN_TO_BE_REPLACED

This episode also includes a hilarious idea for making your teen want to go out and get a part-time job!

Join me, Jeannie Burlowski, for episode 4 of the Launch Your Teens podcast, and you’ll learn:

1. How working a part-time job increases the odds that a teen will be academically successful in college.

2. How the advice of author Meg Jay can help your kids leave behind fake, empty confidence and develop genuine professional confidence.

3. The most interesting points Jeffrey J. Selingo made about this subject in his acclaimed Washington Post article.

You’d rather read than listen? OK you can do that here!

Do you worry that having a job might damage your kid’s GPA?

END_OF_DOCUMENT_TOKEN_TO_BE_REPLACED

Your kids won’t think today’s strategy is funny, but you will—when you watch them scrambling to make a dollar stretch until it screams. Ha ha ha ha!

Join me, Jeannie Burlowski, for episode 3 of the Launch Your Teens podcast, where you’ll learn the most loved parenting strategy on my blog. This simple strategy will help you feel far less teen-related stress, it’ll save you time, energy, and money, and it’ll help you equip the kids you love to become brilliant money managers.

You’d rather read than listen? OK you can do that here!

END_OF_DOCUMENT_TOKEN_TO_BE_REPLACED

Carol kicked off her work shoes and put them away in the front hall closet. “Hi, kids; I’m home!” She called out.

It’d been an extremely long workday for Carol, and the commute home had been long and sweaty due to heavy road construction and her car air conditioning being out. All she wanted to do was get her shoes off and collapse.

When she walked into the kitchen, though, she gasped.

END_OF_DOCUMENT_TOKEN_TO_BE_REPLACED

I am a full-time academic strategist, conference speaker, and author of the book "LAUNCH: How to Get Your Kids Through College Debt-Free and Into Jobs They Love Afterward." My writing and speaking provide parents a clear, step-by-step checklist so they can set their kids up to succeed brilliantly in college, graduate debt-free, and move directly into careers they excel at and love. For more than 20 years, I've helped students apply to highly competitive law, medical, business, and grad schools. I still do that from my website GetIntoMedSchool.com. I am married, and my husband and I have a son and a daughter. We live in Minneapolis.
More about me ...